“Researchers have discovered noticeable changes in the brains of athletes with a history of concussions, months or even years after their last injury. They observed a 10- to 20-per-cent reduction in volume in the frontal lobe as well as 25 to 35 per cent less blood flow to certain areas of the brain, particularly the frontal lobe.”

This is exactly why we recommend baseline performance tests and post-concussion evaluations. We have multiple tests to measure the functionality and integrity of the frontal lobe, and it’s associated areas. 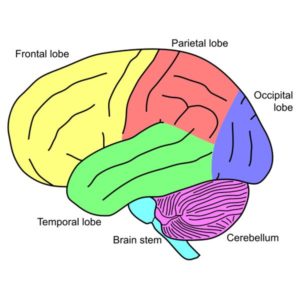 Areas in the vestibular system (inner ear and lower brainstem), the cerebellum (information from the body) and the upper brainstem (midbrain) the area that is responsible for headaches and light and sound sensitivity are all involved and send signals to the frontal lobe completing “the big picture” of what is happening in our brain and body.

The frontal lobe is located directly in the top-front part of the brain and is responsible for:

Proper identification of concussions and appropriate nutrition, supplementation and rehabilitation of the frontal lobe and surrounding areas is imperative to reduce the risk of volume loss after concussion.