Parkinson’s Disease is a neurodegenerative disease that affects the neurons in an area of the brain that produce dopamine called the Substantia Nigra.

While Parkinson’s is often diagnosed after many common symptoms are present, it actually begins much earlier than this, some research says Parkinson’s starts to develop up to 20 years before symptoms appear (research).

Symptoms associated with the diagnosis of Parkinson’s Disease and Parkinson’s-like syndromes: (read more)

The neurons in the Substantia Nigra produce dopamine by making proteins and transporting them down a superhighway of neurons called axons. Dopamine promotes movement in the human body. These building block proteins are called Tau proteins and should be made/folded in a specific way to transport and build dopamine. In a person with Parkinson’s these proteins are signaled to be improperly assembled and they begin to “aggregate” or become “tangled” as a result of the abnormal building process. The end result instead of dopamine becomes more dominated by abnormal tau proteins and neurofibrillary tangles. This essentially becomes a “traffic jam” on the superhighway of neurons called axons. This creates a slowing of transportation and it results in a slowing of movement.

During our initial history and examination, we look for areas of the brain that are slowing down, which is one of the first warning signs of Parkinson’s. We assess vertical eye movements for velocities and hypometria because these are produced in the midbrain where the substantia nigra lives. We ask questions about sleep and digestion. If you have poor sleep, constipation, and poor/slow vertical eye movements as an example, we start to build a case for Parkinson’s or Parkinson’s-like syndromes. As we observe your gait we look for shortening of steps and a decrease of your arm swing from one side to another. We observe your effect or facial expressions. We test your vagus nerve function and ask specific questions about your digestion. We ask you to bring in your labs to assess inflammation, blood sugar, and anemia patterns. We discuss your diet and the impact that can have on your brain and body.

Our approach to working with Parkinson’s

Parkinson’s disease is a complex web of dysfunction and has many possible causes. We know the physiology of Parkinson’s and what can influence it, so we begin with a comprehensive examination to understand what areas of the brain are being affected.

We use VNG to assess eye movements, Computerized Dynamic Posturography to assess your balance and stability, Heart Rate Variability to assess the response of your autonomics which provides a window into the blood flow and vagus nerve activity. We review your recent labs and order new labs as necessary.

Once we establish a baseline, we get to work stimulating the nervous system like a workout, promoting improved strength in the weak areas, and use Low-Level Laser Therapy to help improve the ability of those targeted neurons to improve their efficiency. As the weak areas of the brain get stronger, symptoms associated with your presentation begin to diminish, and your overall clinical picture begins to improve. As your brain improves and strengthens, your symptoms start to resolve and you can start living a more energetic, movement-based life.

Alzheimer’s disease (AD) often starts as memory-related issues and is associated with mild cognitive impairment. There are different stages of Alzheimer’s disease, and the earlier in this process you present to our office, the better chance we have of helping your symptoms.

Alzheimer’s disease is a form of dementia affecting the areas of the brain that control your thinking, memory, and reasoning. Cognitive decline and memory loss are among the first symptoms associated with AD. Initially, these symptoms don’t interfere with someone’s ability to live a “normal” life, but as the disease process continues you develop mild cognitive impairment, and continue to decline. Alzheimer’s has been said to be irreversible, however, reducing and supporting the risk factors that contribute to developing MCI and Alzheimer’s may help slow the degeneration of neurons.

Alzheimer’s affects the frontal and temporal lobes which are both involved in short-term memory, working memory, reasoning, and executive functions. Unfortunately, early on in disease development, you may not realize these things are happening. Initially your friends and family may recognize that your memory is worsening, and the ability to reason or make good decisions is beginning to decline. This can progress as the chart below indicates.

As the areas of the brain degenerate the neurons are dying off. This creates a loss of volume in the physical brain. Below is an image comparing a normal brain and a brain of someone with Alzheimer’s disease. 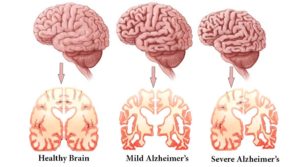 Think of a neuron-like a superhighway, with a frontage road running parallel between neurons. Tau proteins are found inside the neuron on the “superhighway” and are responsible for intracellular transmission (volume of information) while Amyloid Beta peptides are found between neurons (on the frontage roads) and are responsible for extracellular transmission (speed of information) and work together with the brain’s immune system cells called glial cells.

When the above factors are present, breakdown occurs in the building of Tau and Amyloid Beta. Both Tau proteins and Amyloid Beta begin building abnormal proteins which result in Tau protein misfolding and neurofibrillary tangles that create a massive traffic jam on the superhighway inside the neuron. At the same time, Amyloid-Beta plaques are formed by basically gluing the brain’s glial cells and nerve debris together to the outside of the cell causing a slowing of signaling.

Causes of Alzheimer’s are still being discovered and researched, but there are a few commonalities in the development of AD. (read more)

Now, test results for an APOE2 don’t mean you can’t or won’t get Alzheimer’s, and a positive test for APOE4 doesn’t mean you definitely will develop Alzheimer’s, it is just one of the most commonly discussed risk factors to consider when addressing lifestyle and nutritional modifications when supporting brain health, or directing care towards mild cognitive impairment and the diagnosis of alzheimer’s.

Blood sugar dysregulation (aka insulin resistance, aka Type-3 Diabetes which occurs in the brain) is a major, if not the biggest contributor to the development of Alzheimer’s. With all the risk factors we list, blood sugar imbalances seem to be the biggest trigger for tipping the scales towards degeneration of these parts of the brain.

“Type 3 diabetes occurs when neurons in the brain become unable to respond to insulin, which is essential for basic tasks, including memory and learning. Some researchers believe insulin deficiency is central to the cognitive decline of Alzheimer’s disease.” — Mayo Clinic (Read More)

Inflammation is another big contribution, particularly mid to later in life. Inflammation is the response of the immune system to an intruder or something that isn’t supposed to be in the body. The brain is protected only by a single layer blood-brain-barrier (BBB) and when inflammation causes this to open, the brain becomes inflamed, and it continually turns on the immune system (aka microglial or glial cells). Once the glial cells are active it is difficult to turn them off, however, certain types of herbs, nutrients, and supplements have been shown to help downregulate some of this brain-based immune inflammation.

“Over the last decade, the presence of a sustained immune response in the brain has emerged as a third core pathology in AD. The sustained activation of the brain’s resident macrophages (microglia) and other immune cells has been demonstrated to exacerbate both amyloid and tau pathology and may serve as a link in the pathogenesis of the disorder.” — Alzheimer’s & Dementia : Translational Research & Clinical Interventions (Read More)

Chronic Traumatic Encephalopathy, history of concussion, and other head injuries are large contributors to brain inflammation as they also activate the glial cells as indicated above.

Our approach to working with Mild Cognitive Impairment and Alzheimer’s/Dementia patients targets the underlying pathophysiology and risk factors noted above. We run labs to establish genetic risk factors, assess blood sugar stability, evaluate inflammation levels, history of TBI or concussion, and continue diving deeper to look into gut health, stress management, and nutrition/supplementation to help alleviate the burden of these underlying risk factors.

Call today to see if Arizona Chiropractic Neurology and Brain Center can help you.