Did you know that up to 90% of Hypothyroid disorders are considered to be Autoimmune? 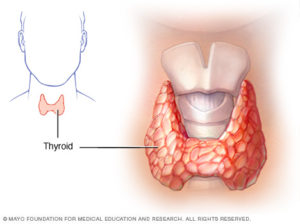 What this means is if you have Hypothyroidism, whether you are medicated or not, there’s a 90% chance that the thyroid disorder is a result of an autoimmune attack on your thyroid, and is not a problem with your thyroid itself.

Think about that for a moment. If you have hypothyroidism and your doctor wants to just get you on medications to “normalize” your TSH and T4, you’re completely missing the boat and missing the immune attack against your thyroid. In autoimmunity your own body is attacking your own thyroid tissue!

Did you know that 70% of an organ must be destroyed for the medical community to consider that a “disease”? Wouldn’t you like to save an organ (your thyroid in this case) before it ever reached 70% destruction? We would too.

When looking at thyroid labs it’s imperative to have ALL the labs run, not just TSH and T4. Thyroid Stimulating Hormone or TSH and Total T4 are probably the most common labs I see run by a primary care physician that are having thyroid symptoms. If these are the only labs your doctor is running on you then you’re just a ticking time bomb of thyroid disease waiting to happen.

The complete thyroid panel consists of:

TSH is influenced by so many things like feedback from T4 and T3, Serotonin levels, Dopamine levels, Cytokine/inflammation levels, Stress, gut function, leaky gut/food sensitivities, immune system function, and the list goes on and on. If your doctor is only running a limited panel of TSH or TSH and T4, then they’re missing the boat.

The reason you need T4 and T3 (T3 is the “active” form of Thyroid hormone that actually influences the celluar receptor site) levels measured is because T4 is converted into T3 mostly at the level of the Gut (small/large intestine) and the Liver. So if you have a lower level of T3 compared to T4, then you’re having a conversion issue and must address the other areas in order to have improvement in your Thyroid levels/function. — Now consider this. If you’re having a conversion issue and your PCP only tests TSH and T4, how are you supposed to know if you’re having a conversion issue? Either they’re going to say “your lab is normal, it’s not your thyroid” or if your TSH is elevated and T4 is low, then they’re going to put you on a generic form of T4. But what about the rest of the thyroid?

Stay tuned for the next post on Autoimmune Thyroid, what to look for, what labs to run, what the labs mean, and how to address these issues naturally.