What is a food sensitivity? Is it a food allergy?

A food allergy is usually more severe and triggers an IgE antibody immune response which in turn can trigger a massive histamine response. These histamine responses are often immediate and can cause rashes, hives, throat closures, blood pressure changes  and can be life threatening. This would be considered an Anaphylaxis reaction.  I will share a story later that includes a food allergy to gluten. People with food allergies often carry an Epi-Pen in case they are exposed to a certain food.

A food sensitivity triggers an IgG/IgA antibody immune response which is most commonly delayed (up to 24-48 in many instances and can remain increased for months if you continue to eat that food). Symptoms of food allergies are very vague and broad, seemingly “random” many times, when they’re not random at all. If tracked or journaled properly, you will begin to notice the correlations between certain foods and symptoms. 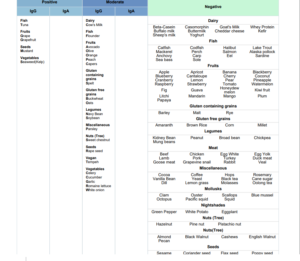 My biggest symptoms are poor sleep, intermittent poor memory, focus and attention issues. When you look at the screenshot of my food sensitivities, you will recognize many commonly “healthy” foods that my body was amounting an inflammatory immune response to. Once that inflammation increased after eating those foods, it would affect my brain. Namely my frontal lobes and my hippocampus where my memory and sleep is controlled. Upon removing my problematic foods and beginning a supplement regimen directed at healing my gut and reducing my food sensitivities- I immediately began feeling better, sleep improved, memory improved and focus and attention improved. This is someone we can run on every patient- and it’s shown to be very effective for their symptoms.

Had a patient present to me for debilitating migraines that started after multiple concussions (wakeboarder) and a gastrointestinal infection he got while in Peru with his family. He had figured out after our initial conversation that onion, in any form, triggered headaches. He also didn’t think that gluten had a negative affect on his health, because his headaches didn’t change whether he ate it or not. So we ran a Wheat Zoomer (which tests for gluten and wheat sensitivities, leaky gut, and wheat allergies) along with a food sensitivity test. The results were as follows.

The patient didn’t think gluten/wheat had any affect on his health, when in fact he was having a Food Allergy every time he ate gluten/wheat. This was causing a major histamine response, and when he would expose himself to onion (food sensitivity) it would have a major response because these two things were often being exposed together.

Once we removed gluten, onion and his other food sensitivities out of his diet, completed a neuro-rehab program to help him heal his gut, he went from having a migraine 70+% of the month, to less than 10% of the month. Many months he doesn’t even have 1 anymore.

A young woman presented to me with headaches, nausea, and chronic pelvic pain. This patient had difficulty becoming pregnant as well. She

tried the medical route with no improvements, tried chiropractic with mild to moderate results, and presented to me after talking with the patient above (wakeboarder). After a lengthy history I decided I wanted to look at her hormones, as well as her food sensitivities. Boy am I glad I did. We had to remove MANY foods she was eating on a regular basis, as well as found out that her hormones are at the level of a 50-year-old woman instead of a 25 year old woman. 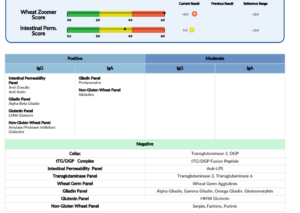 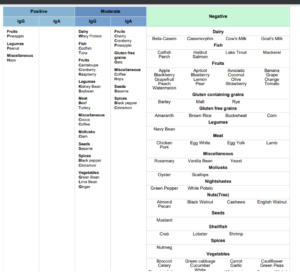 Here, you will see her food sensitivity list and leaky gut panel.

Within weeks of her changing her diet to accommodate her food sensitivities, she began to feel less headaches, less pelvic pain, and less nausea. She also noted that when she would eat gluten containing foods, all her symptoms would increase.

This case isn’t complete yet, but I am very

confident this individual will do very well, and hope to see her hormones improve as well.

All of these cases do well with food sensitivity testing, but that’s not all we do. All cases go through a neuro-optimizing program in order to help heal the brain-gut axis and any other areas of the brain that aren’t optimally performing. Once we complete this process the patient often chooses to begin a maintenance program where we usually see them once a month and we keep their brain and body performing optimally.